By Greg BarlowApril 1, 2021News
No Comments 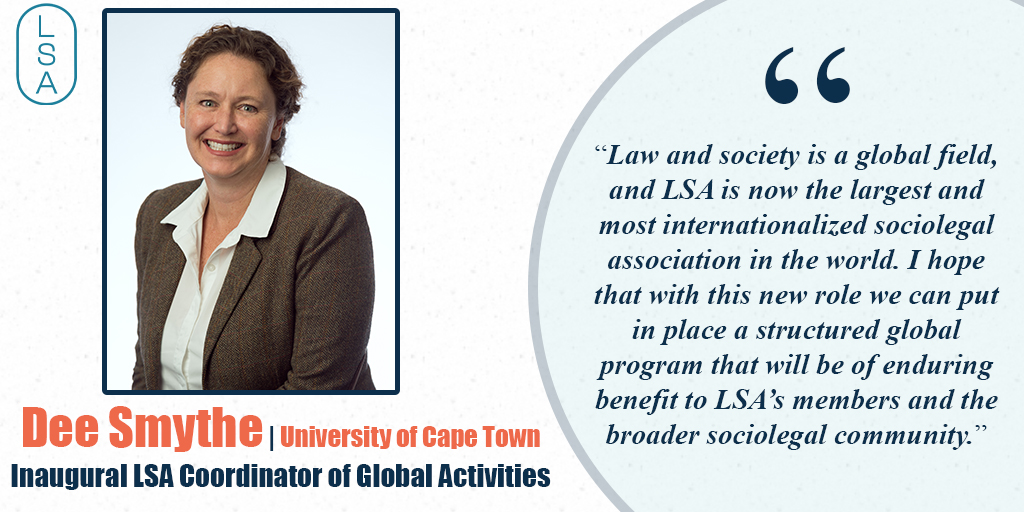 AMHERST, Mass. – The Law and Society Association Board of Trustees and President Penelope Andrews (New York Law School) have appointed Professor Dee Smythe (University of Cape Town) to serve as LSA’s inaugural Coordinator of Global Activities (CGA). The CGA is a newly-created LSA position designed to bolster the association’s commitment to expanding its international collaboration.

“In my opinion Dee’s experience and qualifications for this position are unmatched,” noted President Andrews. “As a member of the board and co-chair of the International Activities Committee (IAC), she knows LSA and its current international engagements.”

Serving a three-year term, Smythe will be responsible for advising the president and the trustees on all matters relevant to LSA’s global role in connecting sociolegal scholars from around the world. She will promote close relations between LSA and other associations, institutions and centers outside the U.S., serving as the LSA representative in the establishment of a standing council of sociolegal associations.

“Law and society is a global field, and LSA is now the largest and most internationalized sociolegal association in the world,” said Smythe. “This new position was established by the board to support LSA’s commitment to our global membership, strengthen our international partnerships and networks, and to grow capacity and opportunities in the field. To be entrusted by the board with the responsibility of giving substance to this position is an enormous privilege.”

Smythe, last year’s co-recipient of LSA’s Stan Wheeler Mentorship Award, is a Professor of Public Law at the University of Cape Town in South Africa. Her scholarship focuses on areas at the intersection of law, policy and social justice—particularly with understanding the operation of transitioning legal systems, ranging from legal education, through legal practice and the operation of the police, prosecution and criminal courts. She is the author of numerous foundational journal articles, chapters and books on sexual offences, attrition in rape cases in South Africa, and on gender, law and justice.

An LSA member since 2004, Smythe has been a pioneer in the field of Law and Society in Africa. She has successfully facilitated sociolegal communities and events within the global South. Smythe was instrumental in bringing two law and society conferences (Cape Town in 2016 and Cairo in 2019) and a pair of Early Career Scholar Workshops (2017 and 2019) to South Africa. Smythe and her colleagues created the Centre for Law and Society (CLS) at the University of Cape Town, which has been described as the leading hub for nurturing a new generation of sociolegal scholarship in Africa.

“In recent years, in part due to support by LSA, there has been a substantial growth in sociolegal networks coming from the global South,” Smythe noted. “Some of these initiatives started out as LSA CRNs [Collaborative Research Network] or IRCs [International Research Collaborative]—many meet annually at the LSA conference.”

Smythe is set to serve as LSA’s 2022 Program Committee co-chair for its next international Annual Meeting in Lisbon, Portugal, where she’s currently spending her sabbatical as a visiting professor and scholar. Smythe is an active member of LSA’s CRN on African Law and Society and currently helps lead the IRC titled, Mapping the Pasts and Futures of Law and Society Scholarship in Africa. She is also involved in a handful of other IRC projects and was a member of LSA’s Mexico City Program Committee for its 2017 international conference.

The formation of the CGA role aims to build on LSA’s commitment to transcending the study of law and society across multiple disciplines, countries and geographic regions. This global initiative focuses on three overlapping pillars: Communication, Collaboration and Capacity Building.

“The CGA has a role to play in making sure that our Annual Meetings are a welcoming and productive space for international members,” added Smyth. “I’ll be working with the board and other LSA committees to implement a Global Collaboration Project, which will provide support for sociolegal training, topical laboratories and sociolegal workshops, with a particular focus on the global South. I’m especially excited to work with our members to put in place programming and activities that support capacity-building and facilitate global collaborations outside of the Annual Meetings.”

Global engagement activities occurring outside Annual Meetings may include smaller conferences co-sponsored by other sociolegal associations, offered both in-person and virtually. New initiatives facilitated by the IAC and CGA could feature the creation of a global council of sociolegal organizations. The CGA also serves as an ambassador for LSA’s commitment to strengthening the global network of sociolegal associations and research centers.

“By its very nature, the field of law and society is a global endeavor because it seeks universal knowledge while recognizing national and local difference,” said IAC co-chair and 54-year LSA member David Trubek (University of Wisconsin-Madison).

“In recent years LSA’s international membership has soared, global engagement increased dramatically and the association is now more than ever a major hub for the field world-wide,” added Trubek. “The creation of the Coordinator of Global Activities reflects both the need to ensure that all of LSA’s activities take account of global opportunities and responsibilities and also the importance of working with other associations and institutions world-wide to build the field.”

For the past 30 years, LSA has increasingly become the global meeting place for the sociolegal field. In fact, Annual Meeting attendance from international scholars has been close to 50% over the past few years, bringing more than 1,000 people from other countries to meet with U.S.-based scholars. Since 1991, LSA has partnered with other associations to host one of its annual conferences outside the U.S. every five years. Previous international meetings have been held in Amsterdam (1991), Glasgow (1996), Budapest (2001), Berlin (2007), Honolulu (2012), and Mexico City (2017).

For LSA’s 2022 conference in Lisbon, Trubek and Smythe developed the Forum for International Coordination and Advice (FICA). FICA serves as a vehicle for broader international engagement with the Lisbon Program Committee. This collaboration has become necessary for LSA’s international meetings where global associations continue to co-sponsor its conference.

“In an increasingly interdependent world, the legal systems of all countries are influenced by global forces and affected by developments in other jurisdictions,” said Smythe. “You can’t frame a climate policy or set out public health requirements without knowing what is happening in other countries. You can’t protect democracy at home without understanding how autocratic ideas and playbooks migrate. You can’t find ways to protect workers unless you know how global trade and investment flows operate.”

In 2021, LSA’s international membership has increased by 33% from a year ago. LSA has strengthened support for its research collaboratives—many of which reflect a global network. It currently houses 41 IRCs, which are groups of interdisciplinary legal scholars who undertake sociolegal research projects with a global reach.

“The big change has been seeing international activities change from a somewhat separate and isolated endeavor largely related to the meetings overseas every five years to efforts now mainstreamed in almost all aspects of the association’s work,” Trubek noted. “The IRCs and CRNs have played a major role in that transformation.”

LSA continues to create incentives for people from the global South and low-income countries to join its community. The association has solicited grants from the National Science Foundation (NSF) to support international scholars’ travel and participation in Annual Meetings. These efforts have enriched the sociolegal field for U.S.-based scholars, while stimulating the expansion of the field elsewhere across the globe.

“LSA has supported a number of excellent global initiatives over many years and amongst our members are scholars who’ve been central to building the field globally going back to the 60’s,” Smythe noted. “On LSA’s side, as an association, our support for this work has been ad hoc and sometimes a bit sporadic. I hope that with this new role we can put in place a structured global program that will be of enduring benefit to LSA’s members and the broader sociolegal community.”

To learn more about LSA and its international activities, please visit its brand-new website at lawandsociety.org.