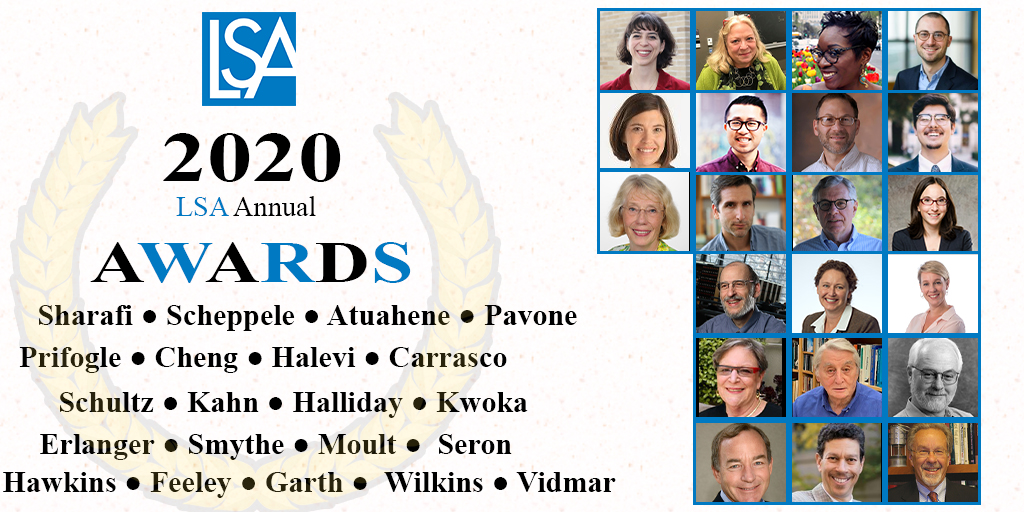 AMHERST, Mass. – The Law and Society Association in coordination with the Executive Office, Prize Committees and President Penelope Andrews, has announced the winners of its 2020 Annual Awards, as 27 sociolegal scholars took home honors this spring. Each year, the LSA recognizes outstanding scholarly publications and contributions to the law and society community. This year’s award recipients represent a host of various sociolegal backgrounds, training and expertise from prestigious institutions across the globe.

The association currently offers 12 prizes for scholarship, awarded at the Annual Meeting, which will take place online for the first time, due to COVID-19. The award ceremony will be held virtually on Wednesday, May 27, from 3-3:45 p.m. ET. Attendees are required to register for the Annual Meeting ahead of time to view the ceremony live. Click here for a direct link to the virtual awards ceremony. A recording of the ceremony will be available on-demand afterwards.

“LSA’s awards represent the best scholarship in the field of law and society,” said LSA Executive Officer Steven Boutcher. “The award winners come from a range of disciplines and backgrounds, and they embody the strong interdisciplinary and global community that defines the Association.”

LSA’s Herbert Jacob Book Prize recognizes new, outstanding work in law and society scholarship. This year’s recipient is Jeffrey S. Kahn—Assistant Professor of Anthropology at the University of California-Davis. Kahn’s book, Islands of Sovereignty: Haitian Migration and the Borders of Empire (University of Chicago Press 2019), focuses on the process and politics of border creation by studying the U.S./Haiti maritime border and boat migration in the latter part of the 20th century. Having spent years in the immigration tribunal courts of Florida, Coast Guard boats patrolling the Caribbean, Guantanamo Bay and Haiti, Kahn’s ethnography was described by one committee member as, “breathtaking.”

Recognizing the best book in sociolegal history, this year’s J. Willard Hurst Book Prize went to Leor Halevi of Vanderbilt University. Halevi’s Modern Things on Trial: Islam’s Global and Material Reformation in the Age of Rida 1865-1935 (Columbia University Press 2019) is a model of how to conduct globalized legal history. It traverses time and place to provide fresh insights into how ideas, people and commodities have travelled in the Islamic world over time.

Taking home the LSA Article Prize was University of Wisconsin’s Mitra Sharafi for her paper, “The Imperial Serologist and Punitive Self-Harm: Bloodstains and Legal Pluralism in British India.” The article examines precipitin testing, a form of serum analysis that identified the species of origin of a bloodstain. A legal historian of South Asia, Sharafi earned her second major LSA award in five years after winning the J. Willard Hurst Prize in 2015 for her book, Law and Identity in Colonial South Asia: Parsi Legal Culture, 1772-1947 (Cambridge University Press, 2014). Serving as a Trustee and co-organizer for LSA’s Collaborative Research Network (CRN) on South Asia, Sharafi hosts the South Asian Legal History Resources website and is a regular contributor to the Legal History Blog.

This year’s Dissertation Prizes went to Emily Prifogle (University of Michigan) and Tommaso Pavone (Pluri Courts Centre at the University of Oslo). Prifogle’s dissertation “Cows, Cars, and Criminals: The Legal Landscape of the Rural Midwest, 1920-1975,” excavates the construction of the rural Midwest through five case studies, ranging from policing, land use and zoning, education, labor rights and community organizing, showing how “rural values” were asserted and inscribed in the law, as distinct from urban and national values.

Pavone conducted 350 interviews in Italy, France, and Germany in his dissertation, “The Ghostwriters: Lawyers and the Politics behind the Judicial Construction of Europe.” Integrating and presenting his wealth of data in the dissertation, Pavone advances an alternative narrative of the actors behind the institutionalization of European law: entrepreneurial lawyers as opposed to ‘activist judges’ or courts were the motors of European legal integration. Their repertoire of action involved constructing cases as well as becoming “ghostwriters” of case referrals to the European Court of Justice.

Bernadette Atuahene of Chicago-Kent College of Law became the LSA’s 10th recipient of the John Hope Franklin Prize, which was established in 2010 to recognize exceptional scholarship in the field of Race, Racism and the Law. Her article “Predatory Cities” methodically and empirically documents how state actors have used illegal methods to augment public coffers that strategically harm communities of color. Co-organizer of LSA’s CRN on Sociolegal Approaches to Property (SLAP) and an LSA Trustee, Atuahene’s research focuses on land dispossession affecting people of the African diaspora.

Cheng—a Sociology PhD Candidate at Yale—wrote “Social Media and Shaping the Social Memory of Police (Mis)Conduct,” which explores how, in the post-Ferguson era of greater scrutiny of their actions, police independently mobilize through social media to strategically disseminate information, shape public discourse and cultivate their own constituencies. Cheng’s research interests include criminal justice, urban sociology and law and society. He holds a JD from New York University.

Motivated by his own personal hardships, Carrasco wrote “Unconscionability, Vulnerability, and Other Sociopolitical Constructions of the Judicial Imagination,” in which he combined qualitative and normative methods to explain how the concept of vulnerability operates within the application of the unconscionability doctrine through the analysis of a random sample of legal opinions in three of the poorest states in the U.S. (Alabama, Mississippi and Arkansas). The first in his family to attend college, Carrasco recently earned two degrees—one in Legal Studies, another in Political Science—along with a minor degree in Public Policy.

Two LSA Past Presidents in Kim Lane Scheppele (Princeton University) and Howard Erlanger (University of Wisconsin) were chosen for the Ronald Pipkin Service Award. Both of these renowned law and society scholars earned their second-career LSA prize, as Scheppele won the Harry J. Kalven award in 2014 and Erlanger received the Stan Wheeler Mentorship Award in 2010.

Erlanger, who served as LSA president from 2003-05, has held just about every officer position within the association, currently fulfilling the role of Treasurer. In addition to being a force in rationalizing and improving the Association’s finances and financial record-keeping, Erlanger has educated and mentored key LSA stakeholders on the Association’s budget and has explained the budgeting process to many former treasurers.

Fresh off her LSA presidential term (2017-19), Scheppele has brought transparency and accountability to the operation of the LSA, and her pursuit of a strategic plan for the Association will be key to its long-term survival in which the association will continue to thrive. Under her leadership, Scheppele has assured the stability and strength of the association, its ongoing operations and vision for a bright future that LSA now enjoys.

A University of Cape Town duo made LSA history in jointly earning the Stan Wheeler Mentorship Award by a unanimous decision. Professors Dee Smythe and Kelly Moult were honored for their tireless efforts at mentoring numerous law and society students on the African continent. This marks the first time the Wheeler Award has gone to scholars based in the Global South and the first time it has been awarded for joint work.

In addition to advising dozens of students, Smythe and Moult have been renowned for organizing large conferences and small writing workshops for hundreds of early-career African scholars. Taking the lead on nurturing a new generation of sociolegal scholarship in Africa, the Cape Town duo are responsible for securing funding for the Centre for Law and Society (CLS) from the National Research Foundation in South Africa and other American-based foundations.

The Harry J. Kalven Jr. Prize was awarded to two scholars this year. Terence C. Halliday (American Bar Foundation) and Margaret Kwoka (University of Denver-Sturm College of Law) earned this year’s award for most effectively advancing research in law and society. Halliday serves as a co-organizer for LSA’s CRN on Global and Transnational Legal Ordering. His outstanding contributions to the sociolegal field pertain to his influential theory of the “legal complex” and his body of work on theorizing and empirically studying law and globalization.

Kwoka’s scholarship on government transparency and the Freedom of Information Act (FOIA) has been portrayed as revolutionary, as it assesses whether the legislation is working the way its drafters intended. Her work has helped shape recent judicial investigations of FOIA and has even informed governmental reform efforts. Multiple federal agencies and the United States Senate have invited her to testify, and have benefitted from her empirical rigor and FOIA expertise.

In recognition of significant contributions to the advancement of knowledge in the field of law and society, the International Prize went to Ulrike Schultz of Fernuniversität in Hagen. Schultz organizes the Gender and Judging CRN and serves as President of the Research Committee for the Sociology of Law of the International Sociological Association (RCSL). Schultz  has been an inspiring colleague for RCSL’s Legal Profession Group. She has assumed national and international leadership roles in the field of sociolegal studies and the sociology of law. Her activities and research span several decades since the 1970s, during which the field of law and society was thriving both in her native country Germany and internationally. Her presence on the Board of the International Institute for the Sociology of Law (IISL) in Oňati has been highly lauded.

LSA will host its first-ever virtual conference from May 27-31. To register, please visit https://lawandsociety.site-ym.com/.

Tommaso Pavone | PluriCourts Centre at the University of Oslo