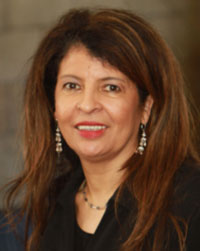 Professor Andrews began her teaching career at La Trobe University in Australia, where she taught for eight years, before moving to the City University of New York School of Law, where she taught public international law, gender and law, race and law, comparative law, and torts for 15 years. She has also held visiting appointments at law schools across the U.S. and internationally.

Professor Andrews is active in international collaborative research and mentoring networks and is committed to ensuring the relevance of law and society scholarship to global academic communities. She is an editor of the International Journal of Law in Context, the Human Rights and the Global Economy E-Journal, and the African Law E-Journal.

She has also published several books and articles that focus on comparative constitutional law, gender and racial equality, human rights, the judiciary, and legal education. Her book From Cape Town to Kabul: Rethinking Strategies for Pursuing Women’s Human Rights was published in 2012.

Professor Andrews’s focus on the judiciary in South Africa seeks to bridge the divide between theory and practice. She is a trainer for the Judicial Institute for Africa, focusing on opinion writing and communications skills for judges. She has also served as an Acting Judge of the North Gauteng High Court in Pretoria for the 2018 third term and as an arbitrator in hearings on racial discrimination in South Africa.

She has served on law school committees and the boards of public interest and human rights organizations, including the Africa Section of Human Rights Watch, South Africa Partners, and the National Center for Law and Economic Justice. Professor Andrews has received many awards, including, in 2015, the National Bar Association’s International Award for her global human rights advocacy. In recognition of her human rights work, the University of KwaZulu-Natal provides an annual award in her name. She is the host of the South Africa Reading Group, which she co-founded with the late Professor Stephen Ellmann in 1994.

She started her two-year term as the President of the Law and Society Association in June 2019.