Professor Willmott shows how fiscalized racism, as a political and legal strategy against Indigenous nations, is taken up at the level of everyday political vernacular by taxpayer subjects 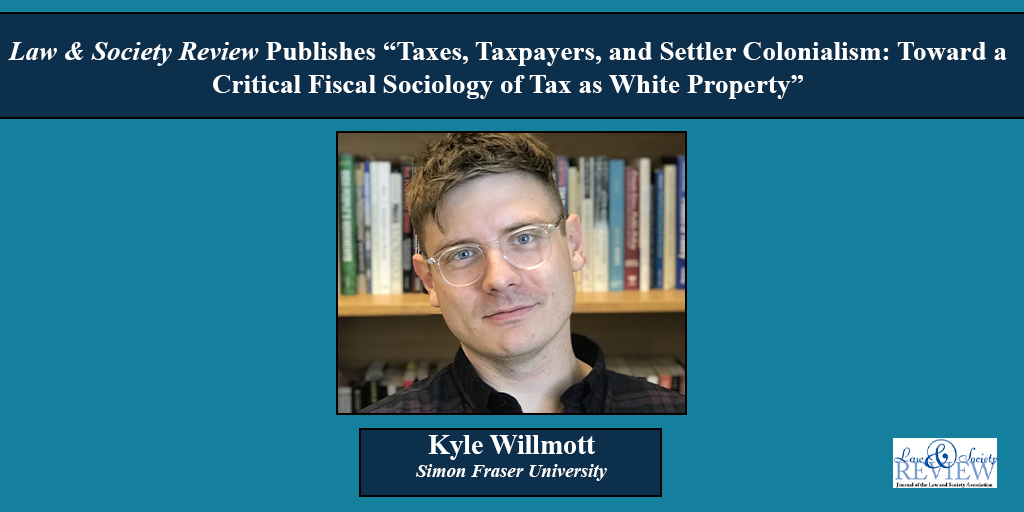 AMHERST, Mass. –The first Law & Society Review issue of 2022 features “Taxes, Taxpayers, and Settler Colonialism: Toward a Critical Fiscal Sociology of Tax as White Property,” written by sociology professor Kyle Willmott (Simon Fraser University). The study explores how tax and fiscal discourses interact with settler colonialism, shape ideas about Indigenous people and specifically examines how the informal life of tax in a settler colonial society produces possessive political identities such as ‘the taxpayer.’

The paper argues that there is a specific link between informal tax imaginaries—ideas about who pays tax, who is thought to not inhabit the status of ‘taxpayer,’ and who costs ‘taxpayers’—and white possessiveness, as they are established in settler-colonial contexts. It focuses on how the taxpayer subject emerges by examining a related series of editorial texts produced between 2010 and 2014 by the Canadian Taxpayers Federation (CTF) during debate around the First Nations Financial Transparency Act (FNFTA).

“In short, I show how tax has come to be seen as a form of white property, undergirded by white possessive anti-Indigenous racial logics,” said Professor Willmott. “This in turn helps to constitute fiscalized racism—how racist ideas and practices are articulated through seemingly objective and benign fiscal concerns.”

A member of the Mohawks of the Bay of Quinte First Nation, much of Professor Willmott’s scholarship is geared around fiscal politics and its manifestation in the context of Indigenous-settler relations. His research addresses how people come to identify themselves as a ‘taxpayer’ in relation to other people—especially Indigenous peoples.

“Having seen and heard these tropes throughout my life, I have come to see them as especially injurious to how people understand Indigenous life, rights, nationhood and people,” Willmott noted. “I see and hear these tax myths, tropes and ‘taxpayer’ discourses circulate and see how they shape many people’s understanding of Native people.”

Professor Willmott suggests that tax is tightly conceptualized around possession through tax obligations and imaginaries and has come to double as a form of ownership—it is not only a legal obligation, but a requirement for settlement. Imagined as a form of property, tax gives settlers possession over those who they believe do not pay taxes and entitlement to decision-making over those Nations it regards as appendages of their legal fiscal obligations.

“Instead of seeing Native people as parts of nations, when settlers see Native people through the prism of tax, it structures this kind of fiscalized racism—where white people, first, see themselves as the legitimate taxpayers, and second, then come to see themselves as executors of Indigenous life,” said Willmott. “The paper could be of use to scholars working in the interdisciplinary study of tax and fiscal politics (law, sociology, anthropology, geography and history), Indigenous studies, Indigenous-settler relations, settler colonial studies, sociolegal studies, political sociology and sociology of race and ethnicity.”