LSR Publishes: “The Chief Justice Versus the Iconoclast”

The article explores how individuals react to the U.S. Supreme Court using social science in its decisions 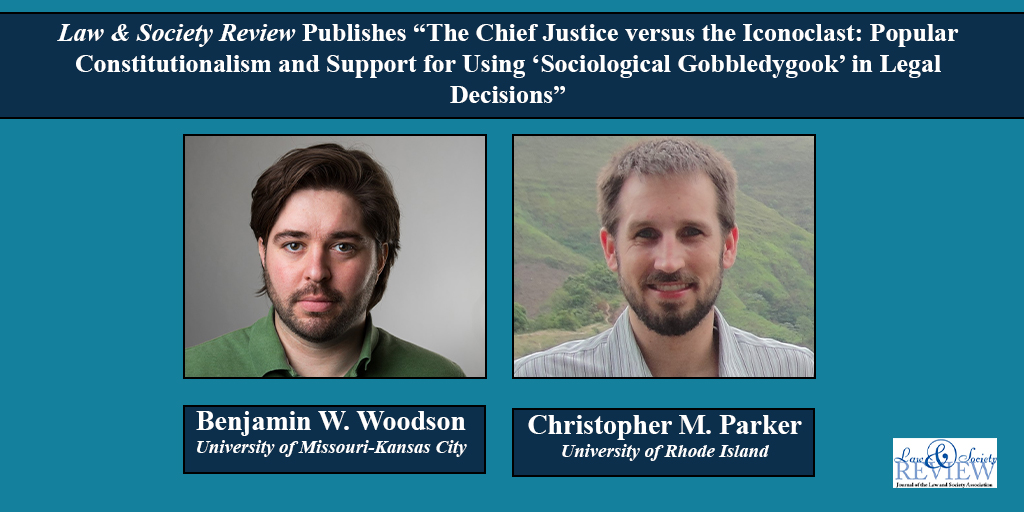 AMHERST, Mass. – In 2017, U.S. Supreme Court Chief Justice John Roberts infamously dismissed the use of social science data in the courtroom as “Sociological Gobbledygook” during a gerrymandering case (Gill v Whitford).  In other words, Chief Justice Roberts implied that social science research in the Court does not belong and could compromise the legitimacy of the high court.

The findings from Benjamin W. Woodson’s (University of Missouri-Kansas City) and Christopher M. Parker’s (University of Rhode Island) new Law & Society Review article challenges this rhetoric, suggesting that there is a place for social science in the courtroom. Their article titled “The Chief Justice Versus the Iconoclast: Popular Constitutionalism and Support for Using ‘Sociological Gobbledygook’ in Legal Decisions” provides a glimpse into the minds of Americans who support the notion of a representative Court that takes the public’s will into account when it comes to legal decisions. Published in the final 2021 issue of the Review, the study consists of two experiments involving the use of social science in court decisions.

“Our research provides some important information about how the American public evaluates Supreme Court decisions,” said the authors. “The results suggest that using social science or other non-legal factors to justify legal rulings will not inherently harm the legitimacy of the Supreme Court, as a substantial portion of the American public endorses a Court that will consider the practical implications of their decisions. Among this group, the use of social science in legal decisions actually increases a person’s acceptance of Court decisions when compared to a legalistic decision.”

The experiments used in the study manipulate the type of reasoning used in a court decision and then measure whether the respondents will accept that decision and move on, or challenge the decision and attempt to have it overturned. The type of reasoning was randomly determined, with one group reading a decision based on evidence from social science, while the other group was exposed to a decision based on legalistic doctrines. Key information was collected from individuals, including their position on political issues, pre-existing knowledge of the courts, normative preferences and other demographic variables.

The first study involves a decision on whether “stop and frisk” policies are constitutional, with the social science condition using empirical studies that examined the effect of that policy on criminal behavior. The second study involves a decision on liability issues, with the social science condition being based on the behavioral economics approach to the law and relying on economic theory rather than directly citing empirical studies. In that study, individuals read about whether the current owner of an oil pipeline should be liable for damages based on environmental contamination caused by the pipeline prior to the current owner purchasing the pipeline. Both studies presented the subjects with a fabricated U.S. Supreme Court decision that always went against the subjects’ previously-stated issue position. The studies also measured the subject’s normative preferences for how the Court should make decisions.

The article shows that an individual’s preferences for how the U.S. Supreme Court should make its decisions dramatically affects their interpretation of the Court’s actions. A significant portion of the sample expressed support for a Court that follows public opinion. Individuals who support the notion of popular constitutionalism reacted positively to the Court using social science in its decisions, while the legal traditionalists—who reject it—reacted negatively. The authors also found that support for popular constitutionalism and legal pragmatism tend to trend together and are linked within the minds of the mass public.

The results show that the effect of the Court using social science in a decision is not to increase or decrease the overall level of acceptance, but to change the composition of those who accept the decision, increasing acceptance among one group while decreasing it among another. The authors conclude that the American public’s views on the legitimacy of the judiciary are complex, and normative preferences need to be considered in theories concerning public opinion of the courts.

“More broadly, our research points to the need to further study how the public wants the Court to decide cases,” noted the authors. “The conventional wisdom—that people will only see the Court as legitimate if it mechanically applies the law—does not seem to describe large portions of the population. We believe that many people are popular constitutionalists who want the Supreme Court’s decisions to reflect the public to some degree. Therefore, further research should focus on popular constitutionalism and how the doctrine influences perceptions of the Supreme Court and its decisions.”