LSA Stories: A Global Map for Access to Justice 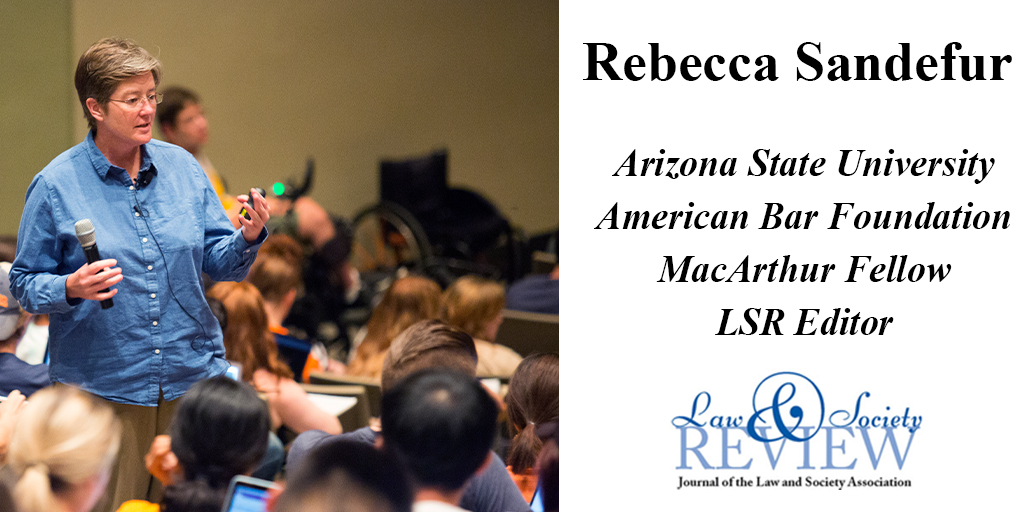 Sandefur, a 20-year LSA member, developed the first-ever state-by-state portrait of the services available to the U.S. public to assist in accessing civil justice. She literally placed the scholarly field of “access to justice” on a map—a map she now envisions spreading across the globe. Sandefur, who’s often told by policy makers and practicing professionals that her research is instrumental in understanding their own work, recalls a time when her field of research wasn’t very well recognized.

“For a while at first, I felt like I might be the only one who thought it was interesting and important,” said Sandefur. “When I would talk about it, American audiences – sociologists, law and society crowds, lawyers – would sit politely and then quietly depart.”

This is probably why Sandefur was humbled but shocked when she discovered her research into increasing access to civil justice for low-income communities led to earning the distinguished MacArthur Fellow honor and MacArthur “Genius” Grant awarded by the John D. and Catherine T. MacArthur Foundation in 2018.

“When I started doing this work, I was doing it because I thought it was interesting and important,” Sandefur recalled. “One source [of inspiration] was a deep intellectual interest and curiosity about inequality. It’s everywhere in human societies. I want to live in a better world. Understanding how things work now and why that can be so harmful is essential learning for designing constructive and effective change.”

Managing Director of the MacArthur Fellows Cecilia Conrad met with Sandefur on campus to discuss ideas for the MacArthur Foundation moving into funding civil justice work. “I certainly didn’t think she was there to tell me that I had been named a MacArthur Fellow,” Sandefur recalled. “I was stunned. Some of my intellectual and social justice heroes have been Fellows—it’s deeply humbling.”

From writers and musicians to entrepreneurs and social scientists, the MacArthur Foundation awards talented individuals who have shown extraordinary originality and dedication in their creative pursuits and a marked capacity for self-direction. Ultimately, this honorable achievement helps progress its fellows’ creativity and research for the benefit of human society. For Sandefur this serves as an investment into the research of inequality in the field of law, supporting her potential for future advancement in addressing civil justice issues.

Sandefur, who credits much of her success to collaborating with an international network of scholars, has focused her career around analyzing and understanding premises surrounding conventional legal services and civil legal aid that affect ordinary folks. When she’s not hiking, camping or cooking her famous smoked goose breast or a nice cassoulet, she’s probably spending time researching access to civil justice, legal professions, civil legal services or inequality.

“I was lucky early on in finding a group of scholars overseas who were interested in these questions and working on them,” Sandefur said. “They’ve taught me a tremendous amount. The recognition is great for the whole field—access to justice is on the map.”

In teaming up with scholars abroad, it’s no surprise Sandefur’s ambition stretches the length of the globe. In fact, her research shines light on civil legal aid cases that effect life-changing events for every-day people— eviction, loss of custody of a child, wage garnishment, or loss of government or insurance benefits.

In her article, Access Across America: First Report of the Civil Justice Infrastructure Mapping Project, she and an American Bar Foundation colleague, Aaron Smyth, mapped how civil legal information and services is structured, delivered, funded produced, coordinated and regulated from state-to-state. Their work compares and explores civil legal aid at state and national level, assesses power dynamics in civil legal aid accessibility and examines the overall efficiency of existing civil legal programs. Sandefur’s work aims to not only create scholarly knowledge, but to also connect that knowledge to world-wide issues and lay the foundation for expanding this map across the Earth.

“People who have been in LSA for a long time often joke that it’s a place for people who don’t fit in their home disciplines,” Sandefur noted. “I think there’s a way in which that’s true, in that it’s a very special kind of community. People are usually pretty generous and inclusive, but they’re at the same time engaged, serious, critical scholars. I think we have the founding generations to thank for setting that tone.”

In addition to teaching at Arizona State University, Sandefur is a Faculty Fellow at the American Bar Foundation, where she founded and leads the Access to Justice Research Initiative. In 2013, she was The Hague Visiting Chair in the Rule of Law, and two years later, she was named Champion of Justice by the National Center for Access to Justice. Sandefur is in her first year as the Law and Society Review’s Editor. The first issue of Volume 54 will be mailed out this week.

“I see the journal’s most important role as supporting and broadcasting this important work, which is being done by sociolegal scholars around the world,” Sandefur noted.

Sandefur is currently on leave this year as a Visiting Scholar at the Russell Sage Foundation, working on a book about civil justice and inequality, that demonstrates the enormous magnitude of the problem and tries to re-frame it. Her newest research initiatives, involve exploring how to build systems around specific types of civil justice problems.