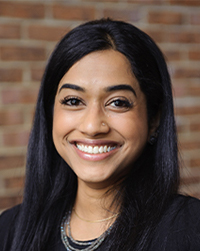 Deepa Das Acevedo is a legal anthropologist and Assistant Professor of Law at the University of Alabama. Before coming to Alabama, she was a Sharswood Fellow in Law at Penn Carey Law. She received an AB in Politics from Princeton, and a JD and PhD in Anthropology from The University of Chicago.

Deepa’s research blends original ethnography, anthropological theory, and legal doctrine to study how law constructs, reflects, and challenges conceptions of personhood and freedom. She writes both in work law, with a focus on the gig economy, and in comparative constitutional law and law & religion, with a focus on India. She has conducted fieldwork in India and the U.S.

Her monograph, The Battle for Sabarimala, is under contract with Oxford, and her edited volume, Beyond the Algorithm, was published by Cambridge in 2021. Her scholarly writing appears in Law & Social Inquiry, the American Journal of Comparative Law, the International Journal of Constitutional Law, PoLAR, Modern Asian Studies, and several law reviews. Her research has been supported by the SSRC, ACLS, and the American Philosophical Society, among others.

As a trustee, Deepa is especially interested in helping to make the annual conference more accessible to graduate students, caregivers, international scholars, and contingent scholars.