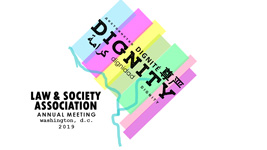 Dignity embraces justice, rights, rule of law, respect for humanity and diversity as well as a commitment to human engagement, subjects that have been central in the law and society tradition. Dignity is a core idea in many different legal traditions and is shaped by a variety of struggles. It provides a bridge across cultures intersecting with diverse values and identities. Recognizing this central idea as our theme when we meet this year in Washington D.C. – at a moment of social anxiety and global uncertainty – focuses our attention on the promise, values and unrealized potential of dignity and will highlight the role of values we examine law in society. The 2019 Law and Society Annual Meeting will initiate our consideration of the place, role and visions of dignity through a number of mini-plenary sessions that will take up the idea in its different forms: